Week 8: Is There Room for Motherhood in Feminism?

A few weeks ago, a friend emailed me a link to a blog post by Samantha Johnson, called “When I Became a Mother, Feminism Let Me Down.” She argues that while feminism prepared her to break barriers and pursue any dream she desired, it did not prepare her for motherhood.

Motherhood was not considered to be one of those many dreams of feminists. Feminism has railed so hard against the culture of homemaker/breadwinner that now, there doesn’t seem to be much of a space to stand inside of feminism while you are a SAHM (stay-at-home-mom, for those unfamiliar with the lingo).

We are teaching our young people that there is no value in motherhood and that homemaking is an outdated, misogynistic concept. We do this through the promotion of professional progression as a marker of success, while completely devaluing the contribution of parents in the home.

But I have to agree.

Before having a child, I saw myself as a successful product of feminism. I had a Bachelors and a Masters degree. I had a full-time job at a university. I had presented at state and national conferences in my field. I had married a man who was also a feminist. He was the cook in our marriage, for God’s sake.

By societal standards of success, I was doing very well.

Our culture is very good at instilling the idea that for anything important, you should engage in some kind of education or training. But the subtext underneath all of this required preparation for a career (and the pride from all of my accomplishments while engaging in that career) is that no preparation is really needed for motherhood.

Either because it’s so easy that anyone can do it? Or perhaps there’s nothing much that you can learn before actually becoming a mother?

Both of which any mother can tell you is far, far from the truth.

In my twenties, I had privately viewed the work of mothering as not as difficult as the job for which I had worked so hard to be prepared. On an arrogant day, I might have even been so bold as to believe that mothering also wasn’t as important or valued.

My logic went like this: Millions of women are mothers, but how many women can say they teach English as a second language? And if I was doing something “less” than my what I could with all of my capabilities, wasn’t that a step backward in life? How much time would I have to take off from work before I could jump back in? Would I still be able to travel and present at conferences?

Would I be as proud of myself for being a mother as I was being a teacher? Would “mother” be a title that I would use to introduce myself to others at parties? And if not, why not?

Having a child changed our lives for sure, but our changes haven’t mirrored some of the national trends.

Unlike many American women, I didn’t have to quit my job to stay at home with the baby. We live in Ohio, where the cost of living is still very reasonable and the commutes are not bad. We make enough money jointly to be able to afford daycare (even though it’s still extremely expensive).

But I can’t deny that I’m not reaching for the stars anymore. I’m doing my job but I have to admit, I bristle at the thought of working evenings and weekends. And gone are the days when I would fuss and fret over a task until it was “just so.”

Unh-uh. Ain’t nobody got time for that anymore.

Sometimes, I think about the trajectory of my career now that I’m in the middle of “small-child-dom.” It would be nice to do something a little different than what I’ve been doing for the last twelve years… but good health insurance.

Ah, to rise so “high”, only to be stymied by family responsibilities and health insurance.

“High” is in quotation marks, of course.

That’s exactly the problem. The modern vision of what it means to “succeed” never, ever depends on having children–although plenty of “successful” people have kids. Children are definitely part of the vision that we have for a modern American family (and if you don’t have kids, people definitely notice and make comments, regardless of the reason).

But when was the last time that you watched a movie where a character was being portrayed as “successful” and that character’s success depended on their role as a parent? (See the bachelor version of Nicholas Cage in The Family Man.)

Usually, the plot of the movie is that the character needs to discover that, hey, being a parent is actually a hell of a lot more important than the job that makes you money (See Adam Sandler in Click!).

All of this reminds me of a recent episode of the podcast, On Point with Tim Ashbrook. In the episode called “A Scathing Critique of Contemporary Feminism,” author and writer, Jessa Crispin explains that feminism has gotten away from one of its main goals–to change systems of oppression. Instead, it has become a movement that seeks to elevate women further and further into the upper echelons of systems that have benefited mostly men. Instead of changing the system, feminism has inspired some women to not only join the system, but rise higher and higher inside of it. While it works out fantastically for those women (what company doesn’t love to brag about how many women it has in upper management?), it leaves the rest of us in the dust.

Or perhaps more fittingly, either unemployed or underemployed.

Her commentary gave me a lot to think about.

In the feminist view, what is “success?”

How do we talk to our children about what it means to be “successful?” And what changes do we need to make in our own minds about what success is so that we may instill a different understanding of success for the next generation? 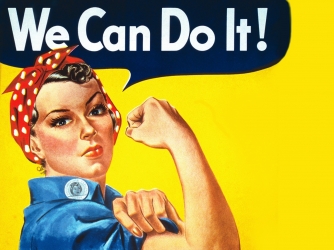