Why My Kids Will Be Getting Jitterbugs Instead of Smartphones

And every few months, I get to sit in a waiting room with a dozen or so middle schoolers and their parents. When it’s my turn, I am called and then seated in one of the twenty dentist chairs that pepper a large room where the orthodontist flits back and forth among the pubescent patients while dental hygienists perform most of the routine parts of the exams.

I tell you this because, in the past two years, I can count on one hand the number of middle schoolers in either of those rooms who

1) didn’t bring or weren’t using their smartphone and

2) weren’t using the installed handheld gaming console that was attached to each dentist chair. (Not kidding.)

Have I already become (at age 35) that miserly curmudgeon who shakes her fist at the younger generation?

Part of me wants to believe that this new shift in technology usage is nothing special. It’s just a new form of communication. 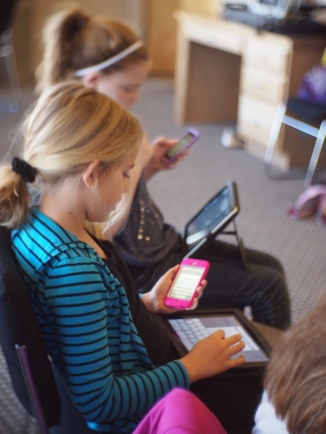 A few weeks ago, my sister shared Jean Twenge’s article in the Atlantic, titled “Have Smartphones Destroyed a Generation?”

Par for the Atlantic’s course, it was fantastic and I strongly encourage you to read it.

Among the most surprising trends that Twenge reports are:

The proportion of Americans who owned a smartphone rose above 50%.

One of the most surprising charts from Jean Twenge’s Atlantic article: (https://www.theatlantic.com/magazine/archive/2017/09/has-the-smartphone-destroyed-a-generation/534198/)

Apparently, teenagers today have more of an in-person relationship with their smartphones than they do with their family (not surprising) or their actual friends. And we’re not just talking about suburban, middle-class teens. This wave of technology is crashing upon both genders, all races, and all socioeconomic levels.

Then, I listened to an episode of On Point called, “How Smartphones are Draining our Brainpower.” The commentators reported on a recent study done at the University of Texas at Austin.

I started teaching in 2006 and I’ve watched the wave of smartphones come crashing into the classroom. In 2011, 90% of my international students had smartphones. I started collecting them at the beginning of class because whenever my students didn’t understand a certain word that I said (which was frequently), they pulled out their smartphones to look it up. But then, they were lost when their attention turned back to me.

And it has gotten worse.

Last year, I had a student from Jordan who was so addicted to his smartphone that he didn’t realize when he was checking it. I once jokingly bet him $10 that he couldn’t refrain from checking his phone for 50 minutes. He said he could. He even put it on the front table, a full twenty feet from his chair, as a means to help him not check it. Fifteen minutes later, students were working in small groups and I was walking around and listening to students. Then, I saw him. He was up at the front of the room getting a tissue, and his hand was already on his phone, checking. When I called his name, he looked stunned for a moment before he said, “No! No! I wasn’t thinking! Wait!”

That’s a funny story. But some stories are pretty scary.

One of the callers in this episode of On Point recalled that she recently tried to collect a smartphone from a student so he could take a test and he broke her door handle in protest.

To teenagers today, the smartphone has become a literal limb of their body and violating that privacy feels akin to abuse.

That’s what makes me assert that this wave of technological is far different from the changes that we’ve seen over the last thirty years.

With previous technological change, that technology didn’t follow you around.

It didn’t create an additional reality where you curate your life for all to see.

It didn’t present you a neverending ribbon of beautiful images from other peoples’ lives.

It didn’t require you to interact with it so you wouldn’t lose a line of communication.

You didn’t sleep with it under your pillow.

It was just there. And you walked away from it. Frequently.

This whole topic makes me worried.

What are parents supposed to do?

There’s the argument, What are you gonna do? Just let your kid be the only one who doesn’t have a smartphone?

I’m not opposed to the idea.

Which brings me to the title of this post. I actually kind of love the idea of buying our kids something akin to today’s Jitterbug when it comes time for them to have a phone. If the point of a phone is to contact your child when they’re out and about, then problem solved.

They can be those adorably out-of-date teenagers just like their parents were, in their Jordache jeans and Ponies sneakers (What? You didn’t have those? Your loss.)

But I really don’t know.

I believe in teenagers being given more responsibility, especially in terms of controlling themselves, monitoring their own behavior, and dealing with the consequences of their mistakes…

(Apparently, that’s what teenagers are doing instead of having sex with one another.)

And, hey, sexting is actually something that teenagers are being arrested for.

Being classified as a “child pornographer” isn’t really a mistake that I want my kids to live with for the remainder of their lives.

I try to be a good example to my daughter about my phone use. I don’t do Twitter. I still can’t understand Pinterest (Question: How do I get my pin to show up on other people’s feeds? Answer: Algorithms and magic.) Instagram befuddles me (You mean I can only upload pictures that are on my phone? That’s stupid.) And Facebook is such a time-sink that I took it off my phone completely.

Basically, I use my smartphone for my calendar, my FitBit app (3 miles today!), music/NPR, and reading my kids’ daily daycare reports (Did the baby poop today? When was his last bottle?). Sometimes I send a text and answer a phone call (98% of the time, it’s my husband. The other 2% is spam.) And I’m miffed that I have to use my phone now to log into the university network where I work.

This is how I get things done.

I realize that this post will probably hit a nerve with some parents. iPhones, iPads, Leap Pads, video games, DVD players, and on and on and on. Even if you don’t buy them for your kids, they’ll use them in school. Or maybe they’ll use them at their orthodontist appointments. (Ha!) It’s guaranteed. You really can’t get around it anymore.

Raising kids is neverending, tiring work. There are great uses of handheld electronics. There are educational games! Kids can learn to read or do math! They’re quiet and they hold still while they’re working on them! It’s almost like life before kids!

I’m not going to say media and electronics are the devil.

I let my daughter watch TV. A lot of TV actually.

She can’t turn to the TV when we’re at restaurants or church or a store (usually) or in the library. She can’t manipulate the TV to do whatever she wants and then be rewarded for it. There’s no TV in her room.

And when it goes off, ain’t no amount of crying and begging that will turn it on again.

And she knows it.

That’s what I worry about with smartphones–that they’ve become the new pacifier, the modern, hip version of the cigarette. The new acceptable addiction that goes hand in hand with excessive caffeine consumption.

I worry because the cocktail of smartphones and social media are not only highly addictive, but they actually shape how we interact with and understand the world–and our roles in it.

They can make us believe that no “normal” person deals with depression or has abortions or fights with their spouse or flips off an asshole in traffic while their kids are in the car or can’t stand the hours of 3-6 on Sunday when you’re just trying to get life ready for the week and the baby just, won’t, nap…

We should care about breaking the virtual bubble and grounding our kids in the hard truths of pain and disappointment and the resiliency that comes from moving through and overcoming.

We should care about the fact that we simply don’t know the long-term consequences of letting our kids turn to smartphones to solve their problems and keep them from being bored.

Their brains are being wired and rewired right now.

Although the brain’s plasticity is still pretty limber until later in adulthood, most of its wiring is completed in childhood and adolescence. And once that wiring is complete, it’s extremely hard to rewire it. Ask any language teacher. Ask any counselor who has worked with abused children.

What happens in their formative years is likely to stay with them forever.

They are learning how to feel boredom and cope with stress and make friends and express gratitude and empathy and JOY.

Will they be able to do those basic human interactions without emojis?

Again, I’m not judging you for letting your child use handheld devices. Someday, I might be in the same boat. Right now, my daughter still hands my phone to me as she would a CD (like we’ve taught her–Don’t touch the shiny part!).

But, really, I think we need to be thoughtful and intentional about not only when and how we let our kids use smartphones, but also how we use smartphones.

What I’m saying is that while we’re suspended in this time when we really don’t know what the long-term consequences are, maybe we should avoid giving our kids smartphones altogether.

Of course, feel free to check back with me in eight years, when our oldest is twelve.