The Tough Nights (a.k.a. Don’t Ask If the Baby is Sleeping Through the Night)

Or read for yourself here:

You know what I’m talking about. We’ve all got our stories.

Here’s one from me.

It was the first day post-maternity leave that I had to be in the office at an 8:30 a.m. meeting.

Before this, my work tasks had been very flexible. I did a lot of stuff at home and only had to come into the office a few times. (And I totally yoga-pantsed it.)

So of course the night before this was also the first night that the baby was sick.

It was the first night that Doug was completely spent and the baby needed me to hold him all night long to sleep. 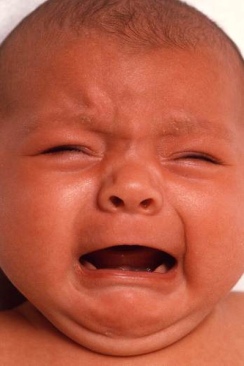 What if I told you that my first thought when I heard him crying in the night wasn’t, You poor thing, are you okay?

What if I told you it wasn’t my second thought? Or even my tenth thought?

After, Oh my God, what is your problem?

After, Look, we’re not doing this all night. We’re just not. I’m serious.

After, I swear to God, if you wake up one more time after I put you down, I’m going to make you scream it out.

After, Why tonight? Really? You could have done this any other night. But now? Really.

And on and on.

I just let it all go and embraced the exhaustion.

If I was going to be tired, I didn’t also have to be stressed and resentful the whole day about being tired.

So when I handed the baby over to my husband at 5:45 that morning, I didn’t yell or swear. I just told him what the night had been like and asked him to stay home with the baby while I took the three-year-old to daycare.

Grocery shopping? Okay. I’ll do it. And I’ll pick her up from daycare. I said.

And would you stay home with the baby while I go to work?  I asked.

I showered. I made my coffee and drank it while I put on enough make-up to cover up the night. Then I dressed my daughter while she was still waking up and still like a wet noodle. Then, I coaxed her into eating her vitamins and drinking her milk. I put her lunch and my lunch together and made formula for the baby.

I loaded F’s lunch bag, her backpack, my work bag, my lunch bag (but not H’s bottle bag or H’s diaper bag since he was staying home). (If you’re keeping track, it’s usually six bags in and out of the car. Seven on Mondays and Fridays.)

I drove fifteen minutes south to her daycare.

Then I drove twenty-five minutes north to work.

I got off the Interstate with another car.

We both followed the same route until it was clear we were both going to the same university. We parked next to each other. I looked over and saw that the driver was a guy, probably my age. He sprang out of his car holding only a set of keys.

I wasn’t at peak performance on Friday, May 12th, but I pulled through. I recovered.

Thankfully, most nights have not been like that lately. Most nights, he sleeps through the night. Sometimes, he has a night feeding. And then he goes back to sleep.

And by the way, don’t ask if someone’s baby is sleeping through the night.

Unless you know them pretty well.

It’s just not good manners. I mean, really, it’s not a great topic for small talk. The only way that question is small talk is if the answer is clearly “yes.” And the likelihood of that is… meh…

A more likely situation is that you send the parent into a fury of jealousy as they imagine you sleeping on a billowy, undisturbed cloud of silence for eight, God, maybe even twelve! extravagant hours. Only to wake up to the luxury of you strolling to your bathroom and taking a hot, steamy, uninterrupted shower, and then magically emerging from the bathroom, just moments later, completely dressed to the nines and made completely over, from your hair down to your nails. And, lo, breakfast is already made. And it’s cinnamon rolls and waffles and bacon and sausage and the most delicious coffee you’ve ever had in your entire life–all 0 calories! And the only thing that you have to do is climb into your brand-new Mercedes and drive to work in completely, inexplicably empty roads and highways until you are work. Where everything is already done. And the only thing you need to do is drink more coffee and catch up on House of Cards, which you still haven’t gotten to see one blessed moment of and it’s driving you crazy (even though the reviews for Season 5 aren’t very good). But still. You binge. All. Day. Long.

Do you really want to drive the person crazy?

Getting through the tough nights without completely losing your mind is an exercise in long-term thinking.

It’s easy to think, I really can’t do this again. I’m going insane. No. I’m not doing it. I refuse. He’ll just have to scream it out tonight.

It takes some effort to reshape your thoughts into,

There will be an end to this.

You’ve been through worse. Remember birth?

One Comment to “The Tough Nights (a.k.a. Don’t Ask If the Baby is Sleeping Through the Night)”