Why are American Women Dying in Childbirth?

American women are more likely to die from complications in pregnancy and childbirth compared to women in any other developed country.

Because there was meconium in my amniotic fluid, a NICU team was paged to be present at the birth to make sure that the baby’s lungs were clear.

Those first minutes after birth were very blurry. There was just too much going on to fully appreciate everything that was happening. From my perspective as the birthing mother, I remember my son turning his head upward and looking me in the eyes (that really happened). I remember seeing that he was a boy. (A boy!?! Really!?! What?!?!)

I remember dropping my head back against the bed and crying in relief that it was over. I remember thinking, “Well, that’s the last time I’m doing that.”

I was euphoric and so, so grateful. We had made it. We had survived that. Both of us. That was what I was thinking.

I did not know that I was hemorrhaging.

This is the thing about hemorrhaging: It happens so fast.

It happens while mothers are crying from happiness that their baby is alive and breathing. It happens while they’re trying to get a good look at their baby’s face. It happens silently as the room’s atmosphere turns from the intensity and suspense of the pushing phase into joy and excitement of the delivery phase.

No woman wants to believe that it’s going to happen to her. I had none of the risk factors associated with postpartum hemorrhage.

But it still happened to me.

While we were celebrating and crying and basking in the joy of the birth, my midwife was tracking my blood loss. I remember looking down and seeing her furrowed brow every time more blood poured out of me. But I didn’t think anything terrible was happening. I was flooded with joy and gratitude that labor was over.

But in the first ten minutes after birth, more and more nurses entered the room and the treatments started. My midwife told me each treatment that she was doing to stop the bleeding. By this time, I had lost about 1200 mL of blood, about 2.5 pints of blood. In other words, I had lost about 25% of the blood in my entire pregnant body.

That’s how close we were to a true emergency. 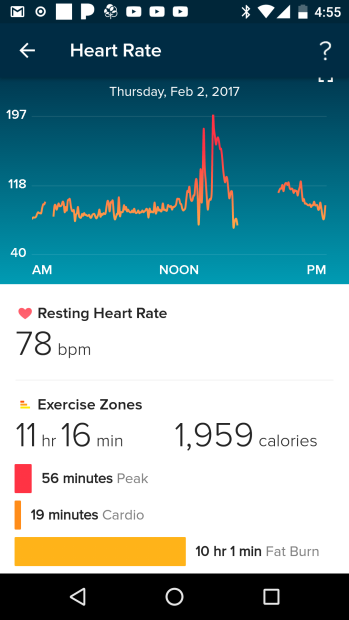 My heart rate during labor. You can see exactly when the hemorrhage begins and how my body responded.

Hemorrhage is one of the leading causes of death in childbirth. 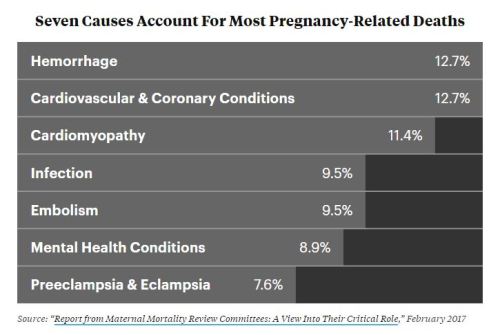 Let me be clear: postpartum hemorrhage isn’t caused by a lack of care. This would probably have happened to me if I had given birth anywhere else.

But women die from hemorrhage when doctors and nurses don’t quickly recognize the amount of blood loss and begin treatment. Some states, like California, have codified and implemented standardized procedures and training for nurses and doctors so that teams can quickly and efficiently follow protocol to prevent postpartum hemorrhages from killing mothers. Instead of “eye-balling” how much blood a mother loses during delivery, nurses were taught how to collect and measure postpartum blood loss to help them quickly identify hemorrhage.

“Hospitals that adopted the toolkit saw a 21 percent decrease in near deaths from maternal bleeding in the first year; hospitals that didn’t use the protocol had a 1.2 percent reduction.”

But not all states have such standardized protocol.

A joint investigation by NPR and ProPublica found that more women are dying of complications related to pregnancy and childbirth compared to any other developed country.

It seems unimaginable. Really? In the United States? But we have so much technology. We have some of the best hospitals in the world. 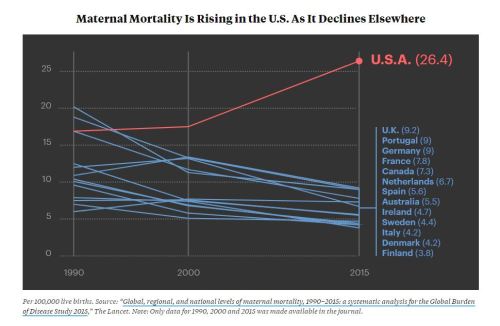 What the hell is going on?!?

There were several major findings from this investigation.

America has not conquered maternal mortality. We like to think that because we have advanced technology and highly trained medical professionals that tragedies like a woman dying in childbirth just simply don’t happen anymore.

At least not nearly as much as it used to.

It’s a kind of hubris, really. To think that we have mastered childbirth. We have tamed it and told it who’s boss. In fact, we’re so good at childbirth that we should just focus most of our attention on the infants. They’re the ones that are the most vulnerable, right?

But the truth is…

“In recent decades, under the assumption that it had conquered maternal mortality, the American medical system has focused more on fetal and infant safety and survival than on the mother’s health and well-being.”

If there was one major takeaway from this report that I want to share with everyone it’s this:

Giving birth in the United States does not guarantee that both mother and baby make it out alive.

I completely agree with the report’s observations that labor and birth put women in the most vulnerable position in their entire lives. They don’t know what’s going on. They’re immersed in the pain and process of labor. Birthing women depend on everyone around them, doctors and nurses alike, to notice the signs that an emergency is unfolding.

If you or someone you know will be giving birth in the United States in the near future, I strongly encourage you to read ProPublica’s full investigative report on this topic.

This is not a political issue. ProPublica is an independent organization that is not funded by political donations.

This is a human issue.

American women are not immune to maternal mortality.

For the women who die every year from pregnancy and childbirth from preventable or treatable conditions, let’s raise our awareness of this problem and insist that we study this at the national level, not just the state level.

We can do better than this.

The death of a new mother is not like any other sudden death. It blasts a hole in the universe.

8 Comments to “Why are American Women Dying in Childbirth?”