Week 6: A Great Time to Return to Work

It’s no secret that parental leave in the United States blows big time. Until now, the most our government has been able to approve is the Family Medical Leave Act (1993), which guarantees that employees won’t lose their jobs while they take up to 12 weeks of unpaid medical leave related to family responsibilities, which can include giving birth.

Hard-line Republicans would say that government has no business in providing paid leave to its citizens, regardless of the reason. That’s simply not the role of government. We don’t want to become a “nanny-state,” do we?

And why should workers be paid when they’re not working? Says the hard-nosed capitalist who views human beings solely as workers, completely divorced of any human attachment that might decrease their productivity.

In her book, Overwhelmed: Work, Love, and Play When No One Has the Time, Brigid Schulte describes capitalism’s “ideal worker” as

“…freed from all home duties, [he] devotes himself completely to the workplace. He is a face-time warrior, the first one in in the morning and the last to leave at night. He is rarely sick. Never takes a vacation, or brings work along if he does. The ideal worker can jump on a plane whenever the boss asks because someone else is responsible for getting the kids off to school or attending the preschool play… So tied to the job is the ideal worker that he works endless hours, even if it costs him his health and his family” (p. 77).

Maybe we should neither be surprised or dismayed by this. After all, we have a capitalist economy. But pure capitalism won’t survive, my friend. Pure capitalism is calculating, cold, and ultimately cruel. If we all adhere purely to capitalism, there would be no more room for care-taking of any kind.

After all, pure capitalism can make a generation great.

As long as our country doesn’t need to a future, capitalism is splendid.

But back to parental

(Sorry, had to rock a screaming baby to sleep once again. Also, I had a bowl of Grapenuts with one hand while holding the pacifier in the baby’s mouth with the other hand. Also, Terminator Genisys is playing in the background. I’m missing a lot of the plot points, but it doesn’t seem to matter. And for as much as I like Emilia Clarke as Daenerys, I’m not crazy about her in this movie.)

Let me summarize my rambling, because this was supposed to be a post about the lack of parental leave in this country.

What I’m saying is that our country’s capitalistic view of screw-your-need-for-parental-leave-there’s-nothing-in-it-for-the-company is dangerously short-sighted.

But, in fact, there is something in it for the company.

A future, healthy, educated workforce to do their future, highly-skilled jobs.

People like this don’t just grow out of the ground.

They start as babies. Cared for by tired, invisible, and underappreciated hands. Mostly by mothers who have either dropped out of the workplace or are pausing their careers as they take time off to give birth and provide care.

They start as children. Educated by underpaid, overworked teachers.

They end as old people. Cared for, once again, by tired, invisible, and underappreciated hands. Sometimes by their children. Sometimes, by nursing homes, where the care-takers make a few dollars more than minimum wage.

This care-taking is work, even if it is done with love.

It’s work that is done behind the scenes.

It’s work that creates the pedestal on which the Ideal Worker stands.

Now, excuse me, the baby is crying again. 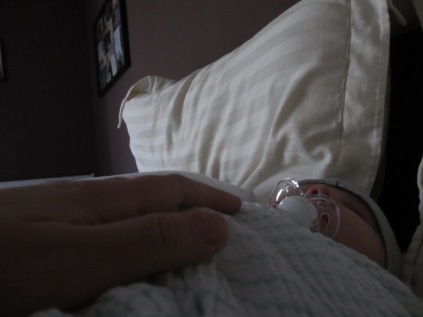 Sometimes, this is how you have to nap. (Moving your hand is *not* optional.)

6 Comments to “Week 6: A Great Time to Return to Work”