Week 39: What We Learn From Pain

I’ve been thinking a lot about pain this week.

Probably because I know that, very soon, I’ll be in the presence of the Mother of all Pains.

I bow in its presence.

In that sense, labor is a devil that I know. But let’s be honest. It’s been three years since we’ve spent any time together. And having known labor, I’m left speechless.

I know its power.

I know that it will require every last piece of my strength and my will.

And I know that won’t be enough. I’ll have to go deeper into myself, into my reserves that I haven’t had to use for years, just to hold on to the belief that I’ll make it through.

Because that’s the only way that I can transform from a doubtful, anxious human being to a powerful vehicle that brings new life into this world.

That’s what labor does. It transforms you.

This weekend, I was reminded of just how transformative pain can be.

In Glennon Doyle Melton’s memoir, Love Warrior, she says this about pain:

What if in skipping the pain, I was missing my lessons?

Instead of running away from my pain, was I supposed to run toward it? …

Maybe instead of slamming the door on pain, I need to throw open the door wide and say, “Come in. Sit down. And don’t leave until you’ve taught me what I need to know.” 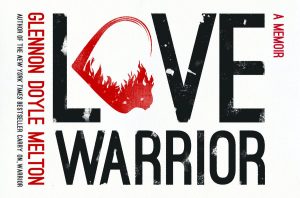 Glennon spends most of her life running from and numbing pain through bulimia and binge-drinking. When her husband confesses that he has been cheating on her for years, she is thrown into a crisis that she feels she cannot solve on her own. She finally enters therapy so she can figure out how to pull herself and her family through their quagmire.

In the most poignant moment of her memoir, she finds herself in a hot yoga class. While other women express that their intentions for their yoga practice are to “embrace loving-kindness” or to “radiate sunlight to all creation,” Glennon says that her intention is to “stay on this mat and make it through whatever is about to happen without running out of here.”

As she lies on her mat, she allows the pain of her life to overwhelm her. She sees memories of all the things that have hurt her and she imagines all the terrible things that might still happen. While everyone else participates in the yoga session, she lies on her mat, weeping. She allows herself to feel all the pain that she has been running from and numbing herself from feeling.

At the end of the session, her yoga teacher tells her,

That–what you just did? That is the Journey of the Warrior.

I cried when I read that. Because it is exactly how I felt after I gave birth the first time.

I felt that I had just confronted all of my weaknesses and flaws, all of my fears and failures, all of my doubts.

And I had come out on the other side.

Before giving birth, I feared that I wasn’t strong. That I was too weak. Too inexperienced. That I wouldn’t know my own body more than my doctors. That when push came to shove, I would get out of the way and let someone better handle the hard stuff.

I feared that that’s how it would probably be when I became a mother. That I would smile in deference and listen to everyone else who knew better than me about what was best for my child.

That I wouldn’t cause problems by raising my concerns.

That I would continue to be “the good little girl.”

That when my time would come, I would numb the pain so I could listen to the doctors respectfully, follow directions like a rational person, and push on command.

I suspected in my heart that that’s exactly who I was.

Another woman who would believe the limitations that everyone else had decided for her.

I’d been fully human for an hour and a half and it had hurt like hell. It had almost killed me, but not quite. That “not quite” part seems incredibly important.

Accepting pain rather than running from pain is not a mainstream sentiment in our culture. We’ve built an entire culture around numbing pain. Not just through medication, but through addiction. To drugs. To alcohol. To possessions.

And addiction to distractions.

Smartphones and constant Internet access have helped to create these personal mini-universes, free from empty moments in which we might otherwise feel boredom or pain or discomfort.

But what is the human experience when we don’t allow ourselves to feel pain, whether it’s physical or emotional?

When we don’t allow ourselves to feel the pain, we rob ourselves of a rich understanding of who we are and what we can overcome.

As Glennon Doyle Melton puts it,

Don’t avoid the pain. You need it. It’s meant for you.

Be still with it, let it come, let it go, let it leave you with the fuel you’ll burn to get your work done on this earth.