“Do you ever worry about your kid getting involved in drugs?”

I chuckled a little at my colleague’s question. We had been standing by the coffee maker–him getting coffee, me getting tea (since I’ve cut back to one cup of coffee per week)–when he blurted out this question.

I can always count on this particular guy to strike up a deep conversation, while peppering it with inappropriate humor. He’s one of those people whom you can tell is surveying the entire world about questions that are important to him. It’s as if he is cataloguing everything he learns for the moment when he needs it–and then his effort will have been worth it.

“So she’s only two,” I said as I filled up my cup with hot water. “But I know what you mean… I had the drug talk with her last week and psshhh… it was hard.” I kidded.

He looked to the side. “So I guess she’s still hitting up the crack pipe at night?”

“Well, clearly whatever I say isn’t going to stop her, right?”

We laughed and clinked our coffee cups.

“It’s just…” he looked around the room before lowering his voice and continuing, “I have this friend whose kid got into some trouble recently. And this friend–he’s like doing everything right, from what I can tell. But his kid got still into heroin.”

I nodded as I ripped open a bag of tea and dunked it in my cup. “Man… that sucks. I hear it’s because heroin is so cheap right now.”

His eyes grew wide. “I know, this is what I’m saying. If it can happen to this guy’s kid, you know, who can’t it happen to?”

“Doesn’t that make you worried, as a parent?” he asked. “Or maybe I don’t know this friend as well as I thought. Maybe there’s some crazy stuff going on there…”

“Yeah, I know… It does worry me, but just a little. I mean, right now, she’s only two, so this isn’t really going to happen tomorrow or anything. I still have complete control over what goes in her.”

But as soon as I said that, I instantly doubted myself.

Did I have control over her?

I knew I had to amend my statement.

“Okay, actually, I don’t really have control over her, even now.” I explained my rationale and he nodded.

“So what do you do? Do you worry all the time?”

I thought for a moment, watching the water in my cup growing darker and darker.

“I’m thinking about this quote from Khalil Gibran. I first read it when I was pregnant–and it really struck me. A few of the lines goes like this: Your children are not your children…They come through you, but not from you. And though they are with you, yet they belong not to you.” 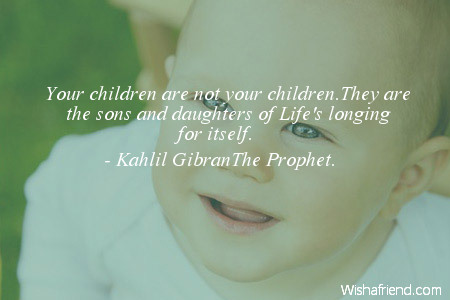 He nodded, sipping his coffee.

“And what I think he was saying was that children aren’t our puppets. And they aren’t our reflections. We shouldn’t get lost in the illusion that we have control over them. We are responsible for protecting them and teaching them, but neither of those things are the same as ‘controlling.'”

“That’s true, that’s true… So you think it’s an issue of how we see ourselves as parents. Maybe there’s nothing he could have done about it. That’s what I’m hearing.”

Do they feel loved?

Do they know they can talk to you without judgement?

Do they know that they don’t have to work to earn your love?

…It’s all of those things. I think a lot of kids try out drugs when their needs aren’t being met.”

“Yeah, but don’t you think some kids get into drugs just because they’re curious?”

“Absolutely. But you’ve also got to tell your kids the awful things that drugs can do to you. You can’t watch them all of the time, but maybe if you’re honest about what can happen…”

I sipped my tea. “But I really think that a lot of it is about their needs. If you meet their needs, maybe they’ll be less likely to look for other things that will.”

We were quiet for a moment.

“It’s easy to talk about this now… when she’s still small and this whole scenario is still very far way. God, I hope I don’t eat my words later on.”