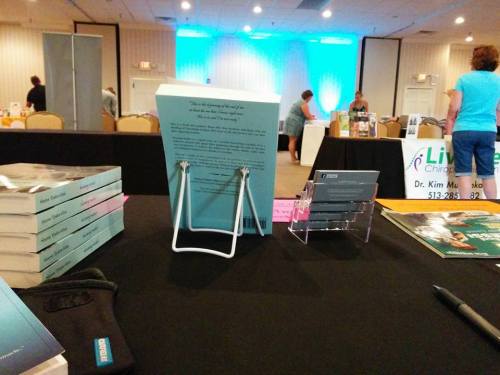 So I’ve written a great book.

I’m selling at events where I can easily reach my primary audience–mothers.

So why are only 2% of people who attend these events actually buying this book?

It’s not because the book sucks. I’m getting glowing reviews from strangers on NetGalley–people who have no vested interest in giving me good reviews.

It’s not because I haven’t defined my audience.

Is it because I’m still an unknown writer?

I’ve thought about this a lot–especially since my last event totally bombed, at least compared to my expectations of what would actually happen. I hesitated to plop down the pricey booth fee for this past week’s baby and kid expo. Their listed booth price was $495.

On the other hand, I thought, maybe that meant there would be a lot of people there. In fact, in my communication with the organizers, I learned that about 400-500 people attended this event last time.

Hm, I thought. Nice, but I can’t afford that.

Holy cow, I mused. I bargained her down to $150 without even intending to negotiate. (I’m sure there are all kinds of implications here for other women who are seeking out ways to negotiate more effectively.)

So I thought that this was a good deal. I would be selling at an event where a lot of mothers would be present, and because it was called an “expo,” people would be coming in with the intention of finding (and buying!) new products. And, hey, maybe the booth prices was so high because I could expect to make some money back to help offset the cost of the booth.

I looked around the room to see what other people were selling. In fact, people didn’t really seem to be selling much at all.

There was another local photographer who was displaying her work and talking about her services. One woman was promoting her swimming classes. An insurance agent was giving out quotes and talking about different policies. Across from me was a chiropractor (who maybe was looking for new clients?). Next to me were three representatives for It Works!, a wellness company that offers vitamins, “superfoods” in the form of powdered drinks, and wraps that shrink and tighten fat cells. There was also an Usborne Books representative and someone selling a product that promised to be a “metabolic booster.” The only other person selling something they had created was a woman selling die-cut quilts and crocheted items.

As I looked around the room, I kept thinking about that listed booth price: $495. Really? No one was turning that much of a profit here. Had everyone bargained for a lower booth price? Most of the tables looked like informational booths, not vendor booths.

And you know what?

The attendees treated them as such.

I started realizing that everyone was queuing up in three places–at the photo-taking station (free pictures, courtesy of a local professional photographer) or at either of the two baby formula company tables (free formula). After getting their free picture, women would load up their strollers with freebies and high-tail it out of there. Several mothers glanced at my table for about half a second–just long enough to see my huge poster–before they barreled out of the conference center.

So maybe that’s one reason that so many people lingered inquisitively at my stack of books. Maybe they were wondering if I was just going to hand them over for free.

Lesson # 1: Don’t sell at events where people are attending just to get free stuff. I’m not slick enough at sales to convert the “I’m here for the freebies” mentality to the “I’m here to buy” mentality.

But I realized something else at this expo.

My pitches were not working.

So, so many times, these women would smile meekly and nod and say:

Or they would explain why they didn’t need it:

And then they would quickly move on.

There is the thin line between advocating for my book and being an annoying salesperson (which I am sooo not.) If someone doesn’t look interested in starting a conversation, I am not inclined to chase them down. And yet, I find myself caught in this constant mental battle about whether or not I should engage with someone who is walking by my table.

Voice # 1: Be confident! Fight your introverted nature! Beat it with a stick! Take a risk! Engage!

Voice # 2: She just wants to be left alone. That couple doesn’t look interested in buying anything. She’s just being polite. Give her an out so she can save face.

(Not to mention Voice # 3: No one cares about your book. No one reads anymore. What a waste of money this was. You should really stop doing these events. They’re just driving you further into the red.)

But then I also wonder if some of the people that I pitched to were even listening. First, they looked at my table. Then, my poster. Then, they would look back at the stack of books, as if trying to figure out what I was all about. I don’t think they could fully process what I was saying to them while they using visuals to make sense of the scene.

So as more and more people walked away, I decided to try something new–I would pitch my book as a gift.

“This is a great baby shower gift for first-time moms.”

“Oh?” an older woman said. Her eyebrows arched. She picked a copy up and started to flip through it. “What a neat idea… Wait, did you write this?”

“Do you know anyone who’s a first-time mom?”

I closed that sale.

I tried this same gift pitch on others and I started to notice that more people were responding to it. Oh, a gift? What a great idea!

And then it struck me: I hadn’t clearly defined my primary buyers.

For a number of reasons, mothers were not seeing this book as something they wanted to spend money on. Maybe it’s because mothers are more likely to buy for others and less likely to buy for themselves. It’s the I’ll-use-my-money-on-something-else syndrome.

Or maybe new mothers look at my book and think, “There’s nothing in that book that I don’t already know.”

Or maybe pregnant mothers are thinking, “Oh great. Someone else giving me advice.”

But perhaps the inner dialogue is different for someone who is buying the book for someone else.

Maybe they think, “I don’t want to be the one to tell her how hard it’s going to be, but maybe this book can.”

Maybe they think, “Oh, something for the mom!”

Maybe they think “She’ll like something to read while she’s stuck in the house.”

This is what I find fascinating–that my intended audience won’t reach out publicly to get this book. Maybe it’s easier for a new mother to receive this book as a gift from someone else, rather than as a purchase for herself. When it’s a gift, she doesn’t lose any face in admitting that–once again–this whole process of becoming a mother gives birth to so many unanswerable questions. Maybe the best way to get this book into the hands of new mothers is to do it indirectly–by having someone else give it to them.

Lesson # 2: Know your buyers. They are not always the same as your audience.

While I was standing next to my table, waiting for people to approach, my mother (who was keeping me company at this event) flipped through the book and said, “You know, if you put a nice ribbon around this, maybe with a gift tag, I bet more people would buy it.”

I laughed, but she looked serious.

“Are you serious?” I asked.

I immediately thought of a friend who said that I should package the book as a ready-to-give gift.

“Maybe drop a bag of tea in there. Some chocolate. Put it all in clear gift bag, tie it with a ribbon. It doesn’t have to be expensive. Just something that makes people think about giving it away.”

Oh my God, they’re right. I need to play the pretty package game.

This is my blind side.

You know how a lot of people assume that women know how to decorate and wrap gifts and create gift baskets? I am not one of those women. At all. If I could wrap everything in aluminum foil without appearing trashy, I would. (No scissors or tape needed!) In this regard, I am totally masculine. My husband wraps the Christmas gifts. He also hangs the pictures on the walls, picks out paint colors, and chooses furniture and fixtures. He insists that I am involved in the process, but I inevitably shrug every time and say, “Looks good to me.”

So maybe you can understand why I didn’t even consider the packaging. Wasn’t this book cover enough to catch their attention?

For my primary audience, this cover might be enough. But my readers aren’t always my buyers.

And my buyers need to see this as a gift.

I brainstormed some ideas with some friends about what types of little add-ons would pair nicely with this book. So far, we’ve decided on a bag of tea, a piece of chocolate, a pouch of ready-to-mix cocoa, and a bag of microwaveable popcorn–all things that you need to “curl up with a good book.”

Lesson # 3: Package the book to appeal to the buyer.

So will this work?

My next event is the National Holiday Gift Show at Hara Arena on the weekend after Thanksgiving. Over a three-day period, do you know how many people went to this event last year?

So, I guess we’ll find out.